Professional Turks to the rescue!

26 Jun Professional Turks to the rescue!

Posted at 13:12h in Blog by Graeme McLeish 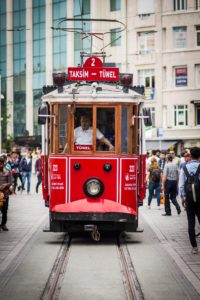 We in business know how incredibly frustrating the inertia is which has hit the UK thanks to the Brexit ‘stalemate’. With the complete lack of movement in any direction into or out of Europe for the country, an almighty total sum is stacking up due to business opportunities lost or not implemented.

However, the reason for this blog article is not to bang the drum of complaint about the financial cost, vitally important though that is. According to an April 2019 report by S&P Global Ratings, the respected New York financial information and analytics business, Brexit has cost the British economy to date £66bn in just under three years – equivalent to around £1,000 per person in the country. And naturally this continues during the current period of inertia too, at approx. £550m per week. Which also chimes with the sum calculated by and announced by Bank of England chief, Mark Carney, late last year. A truly shocking figure, and that’s not to mention the £39bn ‘divorce bill’ that will be needed to leave the union, should that finally occur!

No, the point of the blog is to state a couple of events associated with this inertia position and evident possibility of the UK leaving the EU. One event which is unwanted, and the other which happily should go some way to counteract that.

In a nutshell: since 2016 around the time of the Brexit referendum and up to around April 2019, the number of EU nationals coming to settle in the UK has fallen but, significantly, the number of people outside the EU moving into the UK has risen.

The actual figures published by the Office for National Statistics (ONS) show that in this timeframe there were 15,000 more people from the EU8 countries who departed the UK than immigrated. These countries are made up of all the Central and East European countries which joined the EU in 2004.

This bucks the trend entirely and is the highest figure for the UK’s net migration in 15 years.

Put another way, our net migration has fallen by 70% since the vote to leave the EU.

From the data, a big proportion of those people moving into the UK from outside the EU can specifically be seen to be professionals from Turkey. In total, 6200 emigrated to Britain in 2017, mainly to London, compared with only 2100 in 2015 before the Brexit vote.

Similarly, last year 7607 Turks applied to move to the UK through the visa system that allows Turkish male and female entrepreneurs to come to Britain. This figure was more than double the applications in 2015, and the approval rate for those applications is high.

Their motivation is that London has greater stability than Istanbul, and there are and will continue to be far more job openings in the UK as the EU citizens depart en masse.

The reason why UK needs this boost? Simply because UK plc needs the collective brain power and a highly employed labour force to drive ahead strongly as a nation once the Brexit decision is finally made, whichever way that is.